What do you give a friend who is the best kind of friend?  A friend who is always there to prop you up whenever you are feeling down; one who will always bring a smile to your face and have you doubled over from laughing; one who is always there to share a cuppa (even if only via Instagram); one who is not only spiritually encouraging but is always up for a bit of secret squirrel mischief; a fellow lover of Kaffe Fassett fabrics and one who has been drooling over your latest quilt creation... hmmmm a smaller version of the quilt that you are making made in Kaffe Fassett fabrics of course!

My dear friend Norma may live on the other side of the world in Savannah, Georgia (USA); but despite the distance, it feels like she is always here with me thanks to social media.

The last few months since I lost my precious purr-baby Gemma, I have immersed myself into making my Circle Game Quilt (pattern by Jen Kingwell). I initially started to post photos of some of the blocks on the blog earlier in the year however the quilt started to head in a different direction style wise and my earlier blocks no longer fitted with the new scheme.  I had four "spare" blocks and despite telling Norma that I had thrown them out (as if!), I put them aside with her name pinned to them.  Initially I sewed the four blocks together but they didn't feel right, so after discussing options with a mutual friend I decided to make some extra blocks and enlarge it into a lap size quilt for Norma to snuggle under.

Norma's favourite colour is aqua so I used an aqua wideback fabric for the backing and I hand quilted it using black and grey Perle 8 threads. Before I posted the quilt to Norma, I took it with me on a recent Probus day trip to the Melbourne Docklands - here are some of the photos:

Our first stop on the tour was at the "Organ Pipes National Park" a national park located in the Central region of Victoria.  Sadly we didn't have time to explore but I did manage a few quick photos near the car park. 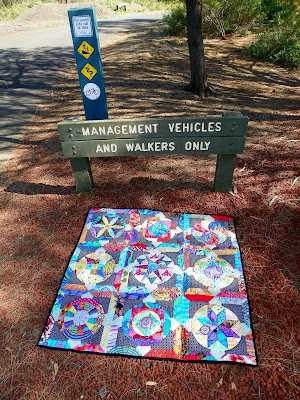 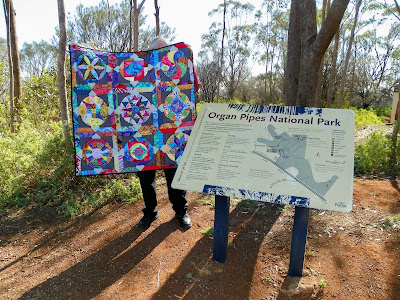 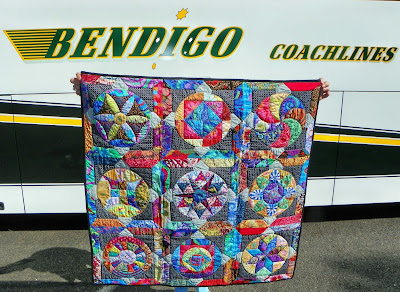 Later that day as we stopped for lunch at "Pier 35 Bar & Grill" in Port Melbourne, as the group sat and chatted I grabbed the quilt and my camera and took a few more photos along the waterfront: 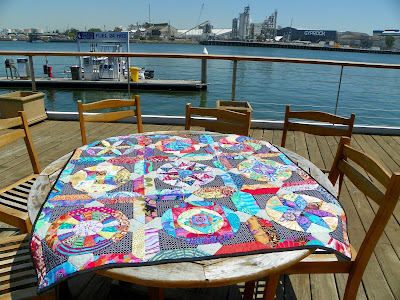 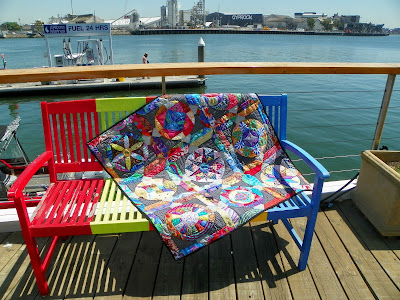 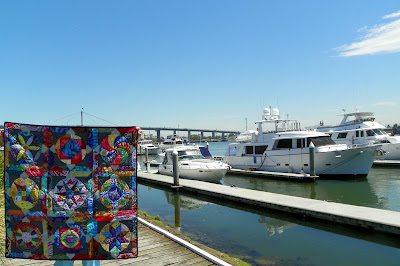 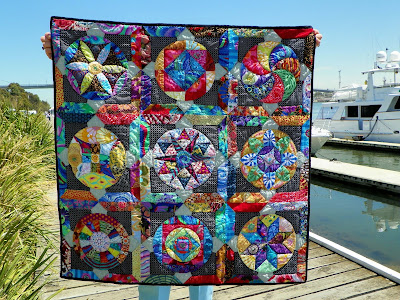 Here are some close ups of the front and the back of the quilt which I took when I got back to Bendigo (the lap quilt measured approximately 41"sq):

The quilt was posted in November with some other goodies and after an extended delay by the USPS in New York, it EVENTUALLY arrived at Norma's house a month later. 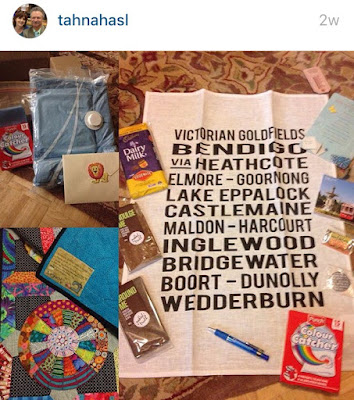 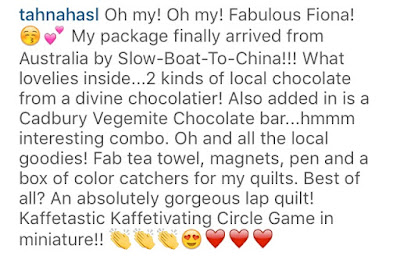